The Fire Within Acupuncture & Wellness 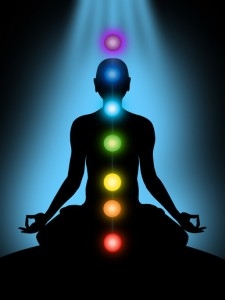 The name Chakra comes from the Sanskrit word meaning" wheel or disk". These centers or wheels of energy are considered the vortex points along the central axis of the body that continually open and close in response to our emotions and stimuli from the outer world. The Chakras operate like valves that channel the electrical current of the Universal Life Force, or Kundalini/ into the body. Each chakra is represented as a multi-petaled lotus, the number of petals varying according to the particular chakra. "Kundalini" literally means coiling, like a snake. In the classical literature of hatha yoga, kundalini is described as a coiled serpent at the base of the spine. The image of coiling, like a spring, conveys the sense of untapped potential energy. Our bodies are comprised of energy. Most of that energy is unseen. The hard wiring of our system is an elaborate network of meridians, nadis, and chakras all contained within each of the subtle bodies simultaneously. This concept is similar to that of the hall of reflective mirrors: each reflecting the image of the other, contained within the other ad infinitum. The chakras work in tandem with and within these networks. ** Acupuncture meridians.. are the pathways of Qi (energy) and blood flow through the body, thereby keeping the Chakras in balance through needling**